My Personal Story of Recovery

As a young adult I was an athlete. In Canada, I was a nationally ranked racquetball player, and played many other sports as well. Outwardly I would appear to anyone as the picture of health.

But earlier in my life I had been in the hospital with osteomylitis, a bone marrow disorder. I was placed on penicillin drip for 3-1/2 months in a hospital. Many of my family and the doctors were thrilled at how well I ‘recovered,’ though I needed crutches for a while after that. I was the only child in my family of six children to need glasses at 12 years old. I began at 12-13 to have chronic migraine headaches. Many days at school the numbness would start in my hands… and the numb tongue and I knew it was coming. I would end up in the nurse’s office, waiting for a ride home. I would be miserable for 2-3 days with blacked out windows in the bedroom, and vomiting bile. As time went by I did not feel well often, and when I hit my older teens my acne and skin issues were unending, so the doctors again decided that antibiotics were the answer and I believe I was on tetracycline for at least 10 years – as they said – to “keep things under control.” As a practitioner now I understand the body/system wide damage caused by antibiotics, but in those days, no one knew.

Later when I was married and had 3 children – all about a year apart, things began to get much worse. I was in chronic brain-fog and rarely was I without gastro-intestinal pain. During that time we bought a Bosch bread maker, and a mill – where we ground our wheat, corn, etc. fresh daily. I had chronic muscle pain and overall malaise, and used to say that I felt someone had poured cement into my body and it had set. I was chronically fatigued, emotional fragility was a daily occurrence, and I was unable to feel rested.

A car collision in my late 20’s was the icing on the cake. I had no “real injuries” outwardly, though my muscles and tissues felt like someone had poured cement in them, and it had set. Life was chronic pain and mental discouragement.

I believe that throughout the next 5 years or so I saw at least 26 doctors. Because we had medical insurance, and good insurance at that, I was recommended to doctor after doctor. One of them even suggested that I had ‘thoracic outlet syndrome’ and he felt my muscle pain and numbness radiating from my left shoulder through the arm into the fingers was because of this. So, sure enough, I was approved by the medical insurance and in the surgery they removed a rib and supposedly freed up the area so my circulation would recover. It never did. I had many other doctors who decided many things…that I was depressed and anxiety-ridden, so I needed anti-depressants and anti-anxiety medications. One of them also suggested muscle relaxers because… after all – wasn’t I in pain all the time? How well I remember the pain shots that I endured as they injected their needles into my shoulders, and different pain spots on my body. I remember going on “guaifenesin” a type of additive to cough syrup that was supposed to remove my fibromyalgia symptoms – surely this one would be the answer? Another doctor said sleep aids would help, because after all, wasn’t I up all night? And on it went… And then I was diagnosed with early stage breast cancer. I did not want to do chemo or radiation. So, one day about 8 years into all this attention from the doctors which had gotten me nowhere – I made a decision. I just decided that I would no longer do this. 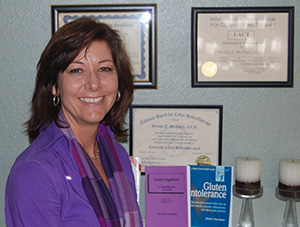 And thus began the journey…

The journey that I would not have missed for the world. Because of my illness, because of my pain it had led me to want to learn. To become open. To realize that there was so much outside the typical American medical paradigm that could help me. Did I need drugs to help me get well? Should others fix my health problems? Was it possible to actually get to the root cause of all of this myself and turn it around? Well at this point I was in my 40’s. Every doctor told me the same thing… “you will be on these drugs for the rest of your life”, “your disorders (Breast Cancer, FM, CFS, MS, Lupus) will not go away, and eventually you will end up in a wheelchair, even if you live”. I began to slowly wean off of prescription drugs. It took me about 18 months, as cold-turkey was not the answer and put my body into horrible withdrawals. I began doing colon hydrotherapy. I was afraid of it at first, and dreaded the appointments. But as I stayed with them, week after week I started to feel better. I began to realize so many things in my life and in a sense… I woke up.

There is a movie scene in the Lord of the Rings where a king who is greatly needed to help win a war is prevailed upon by others to join the battle. This king is a Great Warrior. His sons and the warriors of his country are also greatly needed for this battle, but without the king’s consent and involvement, nothing would happen.

But something is wrong with this king. When he is prevailed upon to come join the battle it is noticed that though his physical form appears strong … his mental capacities and abilities are held under the sway of another. If you looked closely you could see “worm-tongue”… a small slithery man/boy character sitting beside him whispering in his ear every time he was summoned to stand up and join the battle! The king was only able to hear worm-tongue… his ears were tuned to the wrong frequency. As the camera focuses on worm-tongue you realize that this small, worm of a man has this king in his grip. The king is poisoned. He is incapable of movement – physically or mentally.

It is at this point that Gandalf, the wizard who is trying to raise the king for battle, realizes what is happening and confronts worm-tongue. He removes worm-tongue and an amazing thing starts to happen before our eyes…the king starts to come to himself. His countenance changes, skin color becomes healthy and pink, no more gray and sallow. His eyes are bright and the look of intelligence returns. Needless to say he and his country are rallied to battle and the movie goes on.

When I first saw these scenes they brought me to tears. I saw myself in them. I was held under the sway of prescription drugs, surgeries and many respected opinions. I had, like that king, lost my way… my vitality was gone and hope for the future was non-existent. I related deeply.

So I continued with Colon Therapy. I began to study the causes of Leaky Gut, Candidiasis, and Parasites. I radically changed my diet and dropped all sugars and starches. I basically ate a Paleo style diet while I incorporated a gut recovery program to kill off fungus and parasites. I was genetically tested and discovered that I was Gluten intolerant. I had been subclinical for some years, but it had not been discovered. I removed all grains from my diet – wheat/soy/corn/rice (and pseudo grains like quinoa) and dairy products. Over the next couple of years an amazing healing took place. I was off all prescription drugs, and I was feeling better and better. My head and focus was clear, and my depression, anxieties, insomnia and body pain were gone. About this time, I learned about Ozone. I began to bring it regularly into my health regime using every form available which hastened my recovery. The recovery years were  2001-05. And I’ve never looked back.

In 2004 I went back to school. I became a Certified Colon Therapist, and in 2006 a Certified Nutritional Consultant. A few years later I was certified as an FDN-P – Functional Diagnostic Nutrition practitioner, where I am able to utilize functional health lab testing through Biohealth Diagnostics. Most recently, in 2019 I was certified as an A-CFHC – Adapt Certified Functional Health Coach. As a health coach I can help you achieve your personal goals whether it is diet, lifestyle or motivational help in other areas. Life is good and the most amazing thing is that our bodies are always wanting to achieve balance and recovery – I believe in giving back to ourselves the fundamentals of health – why don’t you call today?